Why do bad things happen to good people?  Why does tragedy strike those who love God the most?  Why do the good die young?   One of the most famous sufferers on Planet Earth asked all these questions.  He suffered so deeply that his wife couldn’t stand it anymore.  She said to her husband Job: “Curse God and die”.  In other words, get it over with.  It’s no use.  There is no future.  You could almost see Job’s wife as the first Euthanasia advocate.  Yet rather than choosing suicide, Job clung tenaciously to life.  Often human tragedies like the loss of career, family, or home leads to an even greater tragedy – the denial of any meaning to life.  This was the great temptation that faced Job, and that faces each of us at least once every 18 months on average. 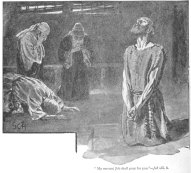 Job went through horrendous suffering for 42 chapters, and yet he never once gave up.  He was tormented by insults from his friends, harrassed by their insensitive advice and browbeaten into admitting wrongdoing that he never committed.  Under attack, Job groaned, he wailed, he doubted and fell into deep depression, he lashed out like an infuriated animal….but he never cursed God.  No matter how discouraged he was, he clung to his integrity.  He never gave up his rock-bed conviction that he was not to blame for his terrible illness.  Thousands of years later, we modern, scientifically-sophisticated people are still often blaming people when they become sick.  Even in 1997, we can too easily be just like Job’s three comforters who just made their friend feel worse.  “Oh, you’re sick in hospital with cancer…Obviously you are not thinking enough positive mental thoughts, or jogging enough, or eating enough granola.”  One way or another, we can slip into psychosomatically blaming others for their illnesses.

Job was covered from head to toe with putrid boils that never stopped itching.  His feverish body hung limp on its frame, his eyes sank back into his head, and his ribs protruded from his skin.  Job’s three friends lacked the courage to feel Job’s pain, and respond rather than just react.  Job didn’t need a lecture from his three friends; he needed love.  He didn’t need a sermon;  he needed sympathy.  He didn’t need criticism; he needed comfort.  When we are struck down by tragedy, we need to know that our friends really care.  And we need to know that God cares, God really listens, and God will never leave us.

Why is it that so many famous writers, poets,

philosophers, and scientists have turned time and again to the book of Job?  Perhaps because it easily takes its place among the masterpieces of the world’s literature.  The author of Job was a poet of rare genius who powerfully expressed our deepest feelings and thoughts.  Sooner or later, we all identify with Job because suffering is part and parcel of life.  We are bonded to Job through our common experience of pain.  Many reject God, but no one rejects Job.  Simply by suffering so greatly and hanging on for dear life through it all, Job has won our hearts.

As Stephen Lawson puts it, heaven is often silent.  In such times, the only answer God gives is a deeper revelation of Himself.  We learn that He is the answer we seek.  Ultimately we must not trust a plan, but a Person.  There is something about our questioning minds that longs for answers.  If we only knew, we reason, we could handle our pain.  Yet placing God’s infinite wisdom into our finite brains would be like trying to pour the Atlantic Ocean into a Dixie Cup.  It just wouldn’t fit.  It’s too vast and deep.

Job’s faith wavered.  He mourned.  He cried.  He protested.  He questioned.  He even cursed the day of his birth.  But he never cursed God.  In the face of adversity, he remained firm in his only hope – God.  When our world falls apart unexpectedly, we must  not dwell on why but on who.  Only God’s disclosure of Himself is powerful enough to heal the heart and relieve the pain.

Job in his sufferings, said Mike Mason, resembled Jesus on the cross.  The only person who has ever endured more than Job was Jesus of Nazareth. We do not need to have nails driven into our hands and feet to know what a cross is.  A cross is a cross.  To be crushed is to be crushed, and we all have had a taste of this.  Job in his suffering was looking for what could only be found in a manger, on a cross, in an empty tomb.  The key to Job’s sufferings, and indeed to life itself, is the cross.  Jesus did not rise above suffering; he went through it.  Jesus let himself be captured by soldiers, tried by legalists and bureaucrats, condemned by a mob, scourged by mockers, and finally pinned and exhibited like a specimen insect… No amount of suffering could shake either Jesus or Job from their rock-bottom clinging to God.  Though he slay me, said Job, yet will I trust in Him.  We can either curse God and die, or bless God and live.  May we choose Life today that we and our children may live.

and spirit is available online with Amazon.com in both paperback and ebook form.