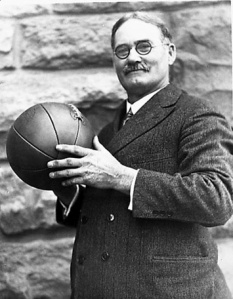 With the tragic helicopter death of superstar Kobe Bryant, there has been a lot of people thinking about basketball’s impact on our lives.  Almost every North American has played basketball, even if only shooting a few baskets at the local park.  At my high school ‘Winston Churchill’, we had a passion for basketball. In Grade Eight, my dream was to become a basketball star.  My only limitations were getting the ball in the hoop and the fact that I was only five foot two.  Back then, I had no idea that basketball was invented by James Naismith, a Canadian on loan to the United States.  I was also unaware that basketball had deeply spiritual roots.

Dr. Naismith had a rough life growing up. When he was only eight, his parents died from typhoid fever.  Earlier the family sawmill in Almonte, Ontario, had burned down. Having visited the Naismith museum in Almonte, it gave me a deeper appreciation of the many challenges that James had to overcome.  After leaving school at age fifteen, James worked for five years as a lumberjack.  During his lumberjack phase, he had a powerful encounter with Jesus Christ which led him to attend McGill University in order to become an ordained minister.   Naismith commented: “Finally I decided that the only real satisfaction that I would ever derive from life was to help my fellow beings….”

Naismith studied so hard at McGill that he neglected regular physical exercise. His friends convinced him that involvement in sports would make him a better student.  He grew to love football, rugby, baseball, field hockey, and lacrosse.  Naismith discovered that his passion for sports helped him connect with young people when he shared the gospel with them.  His sister however was deeply disappointed that James chose sports ministry instead of looking after a local congregation. Sadly she never attended any of his later basketball games. 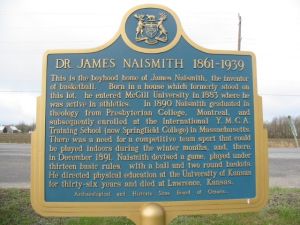 To pursue his sports ministry, James Naismith moved to the International YMCA Training School in Springfield, Massachusetts. The YMCA was a pioneer in the ‘muscular Christianity’ movement, being among the first to integrate prayer and bible study with athletics.  By 1905, almost 50,000 men took part in YMCA college Bible studies, including 1,000 at Yale University.  Naismith greatly admired Coach Stagg who made a point in the dressing room of saying “Let’s ask God’s blessing on our game.”  Naismith noted that Coach Stagg “did not pray for victory but he prayed that each man should do his best and show the true Christian spirit.”

James was asked by another coach Dr Guilick to create an indoor winter game for bored students. Calesthenics, involving sit-ups and marching, was not exciting enough for them.  Alluding to Ecclesiastes, Dr. Guilick had made the statement: “There is nothing new under the sun. All so-called new things are simply recombinations of the factors of things that are now in existence.”  James responded by saying: “All that we have to do is to take the factors of our known games and then recombine them, and we will have the new game we are looking for.” Two weeks later on December 21st 1891, basketball was invented.  The thirteen rules of basketball which James drew up have remained as the foundation of the game.  Drawing on another game called ‘duck on the rock’, Naismith had the students throw soccer balls into baskets.  Initially they used real peach baskets and there were no backboards to bounce off.  James intentionally invented a game that would encourage less violence and more sportsmanship.  By placing the goal way up in a basket, the participants were less likely to harm each other near the goal as in hockey. By not allowing players to run with the ball, he also eliminated the violent tackling found in rugby and football.  Even today basketball has far less group violence than other active sports. 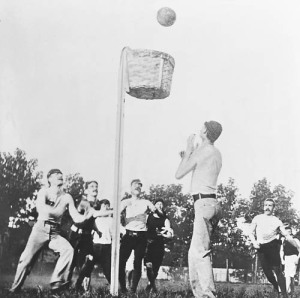 spread around the world by believers using the YMCA gospel of godliness and good games.  Canada was the first country outside of the United States to start playing basketball. Ironically because British women were the first to start playing basketball, British men saw it as a women’s game and initially refused to play it.  Basketball did not enjoy instant success at first. But now over 300 million play basketball around the world.

Both Canada and the United States claim James Naismith, with both nations dedicating special postage stamps to his memory. Though Naismith is honoured in eight Canadian and American Halls of Fame, he never profited from his invention of basketball, even losing two houses to foreclosure. Unlike basketball players today, Naismith did not endorse sports equipment, or sell products in ads. In contrast to the twenty-three million dollar top-NBA salaries today, Naismith saw basketball as being for fun, not for profit. James’ stated vision was “to win men for the Master through the gym.”

Naismith was not just the inventor of basketball.  After his brother Robbie died unexpectedly from infection, James decided to also become a medical doctor. As a minister, coach and medical doctor, he was able to minister to the body, mind and spirit.  The Journal of Health and Physical Education eulogized Naismith as “a physician who encouraged healthful living through participation through vigorous activities” and a builder of “character in the hearts of young men.” As one of his students mentioned, “With him, questions of physical development inevitably led to questions of moral development, and vice versa.” Naismith challenged the National Collegiate Athletic Association to “use every means to put 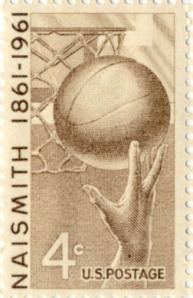 basketball (as) a factor in the moulding of character…”

With good coaching, said Naismith, basketball could produce the following results: “initiative, agility, accuracy, alertness, co-operation, skill, reflex judgement, speed, self-confidence, self-sacrifice, self-control, and sportsmanship.”  James saw self-sacrifice as “a willingness to place the good of the team above one’s personal ambitions”, saying ‘There is no place in basketball for the egotist.’  Sportmanship was described by Naismith as ‘playing the game vigorously, observing the rules definitely, accepting defeat gracefully, and winning courteously.’  In short, James wanted athletes to play by the Golden Rule and to love their neighbour.  May Naismith’s vision continue to inspire our young athletes to greatness and godliness. 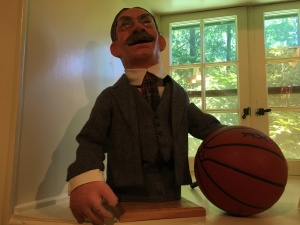 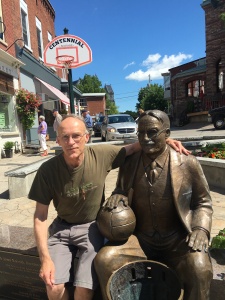 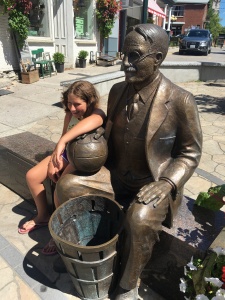 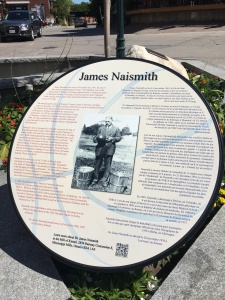 -award-winning author of Battle for the Soul of Canada