Countless numbers of us in Canada and around the world were deeply touched by the loss of the crew of the Space Shuttle Columbia. The astronauts were doctors, scientists, pilots, women, men, wives, husbands, fathers and mothers, from many races and cultures. We gave thanks for these courageous explorers who ‘pushed the envelope’, risking their lives to discover more about the amazing universe that we live in.

“In the skies today we saw destruction and tragedy,” President Bush said on the day of the tragedy. “Yet farther than we can see there is comfort and hope. In the words of the prophet Isaiah, ‘Lift your eyes and look to the heavens. Who created all these? He who brings out the starry hosts one by one and calls them each by name. Because of his great power and mighty strength, not one of them is missing.’ The same Creator who names the stars also knows the names of the seven souls we mourn today. The crew of the shuttle Columbia did not return safely to Earth; yet we can pray that all are safely home.”

On a typical Sunday, you might have found astronauts Rick Husband and Michael Anderson worshiping at 5,000-strong Grace Community Church in Houston, Texas.

Senior pastor Steve Riggle said “Rick” and “Mike” were men who “fervently lived for God.” He says they’re in the Lord’s hands now.

The Rev. Riggle said that “Rick Husband was a guy who, first, absolutely loved God, and second, loved his family, and third, loved flying. He loved being an astronaut. But it was in that order…” “Rick”, said Rev. Riggle, “was a guy who knew how to have a good time and how to joke and at the same time he was absolutely serious about the mission and what his responsibilities were. He was a real leader: he was the right guy to have as commander of this mission. He was a gatherer, he was a guy who knew how to release the crew: to let each member of the team do what they were supposed to do, and it’s just a great loss.” 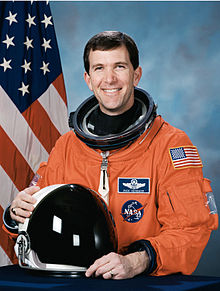 Shuttle commander Rick Husband, in a pre-recorded videotape before he went into space, said: “If I ended up at the end of my life having been an astronaut but having sacrificed my family along the way or living my life in a way that didn’t glorify God, then I would look back on it with great regret and having become an astronaut would not really have mattered all that much,” Husband said on the video. “And I finally came to realize that what really meant the most to me was to try and live my life the way God wanted me to and to try and be a good husband to Evelyn and to be a good father to my children.”

Payload Commander Michael Anderson said on the videotape. “We have had a lot of challenges. Rick and I both feel we were put on this mission for a reason and we have tried to meet all those challenges with prayer.”

Prior to the Columbia Shuttle space disaster, mission commander Rick Husband played a CD in orbit called “Rise Up and Praise Him.” During the fated shuttle mission Husband aired the CD on which he was recorded singing a solo with his church choir, “Before the Throne of God Above.” Rick signed all of his photographs with Scripture, Proverbs 3:5-6, ‘Trust in the Lord with all your heart and lean not on your own understanding’.

The spouses of the crew each were able to pick a song for them to wake up to one of the mornings they’re in space. Rick’s wife selected “God of Wonders” sung by a Christian artist and personal friend Steve Green. Rick communicated with Mission Control after the song was played. The conversation went something like this: Mission Control – “Good morning. That song was for Rick. It was ‘God of Wonders’ by Steve Green.” Rick – “Good morning. Thank you. We can really appreciate the lyrics of that song up here. We look out the window and see that God truly is a God of wonders!”

Steve Green also shared part of an e-mail he received from Rick, transmitted from outer space! Rick wrote about how overwhelming it was to see God’s vast creation from space. He said he had never cried while exercising before, but peddling on the bike and looking out the window at God’s incredible creation brought tears to his eyes.

Rick made 34 devotionals, by video, before he left on the Columbia. There were 17 for his daughter and 17 for his son, one for each day he was to be gone. So each day his daughter and son had their own “devotion with Dad” by video. What treasures they will be to his children! Rick Husband left a note with his wife Evelyn in case he died. “Tell them about Jesus,” it said. “He means everything to me.” My prayer is that all of us reading this article may be equally so devoted to our spouses, our children, and our Lord.

To receive a personally signed copy of any of our books within North America, just etransfer at ed_hird@telus.net, giving your address. Cheques are also acceptable.