Raymond William Stacy Burr  was born on May 21, 1917 in New Westminster, BC.  Raymond started in theatre in his late teens, as well as having other jobs to help the family and earn a living for himself.  Joining the Armed Services during 1943, he was injured by shrapnel and discharged in 1946.  After his movie role in the 1948 film “Pitfall”, Raymond became stereotyped as a portrayer of vicious vindictive “villains”.  He went on to work in over 90 flicks in the next 11 years before landing the part of Perry Mason.

The original Perry Mason TV series first aired on CBS on September 21, 1957. The series was based on the famous “Perry Mason” books written by Erle Stanley Gardner.  Raymond Burr played the remarkable attorney Perry Mason who never, except sort of once, lost a case.  Running from September 1957 until May 1966, the series had 271 episodes, all but one filmed in black and white.  Perry Mason is being seen in endless reruns all around the world, and is promoted by numerous Internet pages dedicated to Perry Mason. 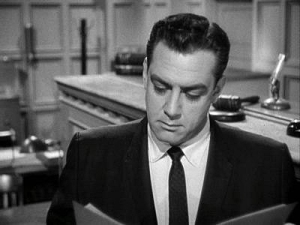 As I thought about the enormous, lasting appeal of Perry Mason over the years, I realized that Perry Mason taps into that desire we all have for a father who is really willing to stick up for us.  All of us need a father who will use his strength to protect and provide for his family.  Some men are more known for their attacking and crushing, rather than for their protecting and providing.  I am thankful for my father who defended me when I was being unfairly attacked, who believed in me when others turned their backs on me.  Thank you, Dad, for being a Perry Mason to me.

The Perry Mason courtroom drama always had a set pattern to it. In the first half hour, a murder was committed and the police arrested the wrong person. One way or another, Perry was recruited for the defense. A trial or hearing followed.  The police and prosecuting attorney were frequently baffled by Perry’s fancy footwork and almost illegal shenanigans. Perry always won the case, dragging a confession from the murderer, usually in court.  His clients always went free. And of course, there was always the famous ending scenes, often ending with some sort of bad joke or humour.

What is it about the Perry Mason courtroom drama that still draws people year after year? 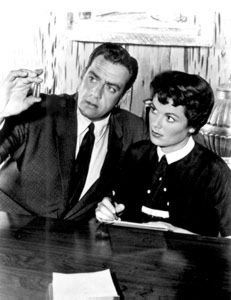 All of us want to believe that life is fair and good.  Yet very often tragedy and injustice crush our hopes for our future.  Perry Mason represents an outside force that cares and has the power to really change our lives.  In the midst of horrendous tragedy and injustice, Job cried out in the words made famous by Handel’s Messiah: “I know that my Redeemer Liveth”.  Having finished two years of studying Hebrew, I discovered that the word Redeemer(go’el) in the Hebrew actually means “Defense Attorney”.  Job was really saying: “I know that my Perry Mason, my Defense Attorney, lives…I know that he will have the final word in court and set me free.  I know that he will baffle the prosecuting attorney.  I know that Perry Mason will have me vindicated, and proven innocent.”

When Handel’s Messiah sings out the words: “I know that my Redeemer Liveth”, the redeemer being sung of is of course Jesus Christ.  Most of us have never linked Perry Mason and Jesus Christ in our minds.  But in fact, that is what Job is really saying:  “I know that my defense attorney, my ‘Perry Mason’, liveth”.  Is it any co-incidence that Jesus is described as a defense attorney, an advocate who will speak in our defense in court (1 John 2:1)?  My prayer  is that each of us may discover that we are not alone, that there really is someone out there willing to stick up for us.