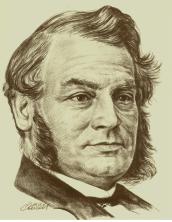 Sir Samuel Leonard Tilley, a Father of Canadian Confederation and twice the Lt. Governor of New Brunswick, rose each morning to start his day with prayer and Scripture reading.  As the 33 founding Fathers gathered in 1864 at Charlottetown, PEI, there were many suggestions on what to call this new nation. That morning, as Tilley read from Psalm 72:8, he became so convinced that Canada should be a nation under God, that when he came down to the Conference session, he presented the inspired name “Dominion of Canada”.  Our National Motto on our Coat of Arms “A Mari Usque Ad Mare” (from sea to sea) was drawn once again straight from Psalm 72:8. “He shall have dominion from sea to sea.”

Tilley came to a personal knowledge of Jesus Christ in 1839 through his Anglican rector, the Reverend William Harrison. His life was so dramatically transformed that he even became an Anglican Sunday School teacher and a Church Warden (Elder).  Tilley’s son Harrison became a well-known Anglican priest.

One day, an 11-year old girl ran to Tilley for help, after her drunken father brutally stabbed her mother to death.  Because of this tragedy, Tilley went from being a quiet pharmacist to becoming the Premier of New Brunswick in his campaign for alcohol reform. When Tilley brought in actual alcohol legislation, he was burned in effigy, his house was attacked, and his family’s lives were threatened. 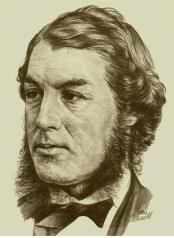 Tilley the ‘dry’ Anglican was good friends with Sir Charles Tupper the ‘drinking’ Baptist Premier of Nova Scotia.  Both shared a passion for railways which they believed were the key to the Maritimes’ future.  Sir Charles Tupper eventually became the Federal Minister of Railways, bringing the CPR railway line to Vancouver, and BC into Confederation. Before the arrival of the railway, traveling to Vancouver would take all summer by riverboat and stagecoach.

The 1864 Charlottetown meeting was originally intended to bring a Maritime Union of New Brunswick and Nova Scotia, to defend against the threat of American invasion. But Tupper and Tilley dreamed bigger, inviting Ontario and Quebec to join them in a new Confederation. Tupper believed in the greatness of Canada, saying: “The human mind naturally adapts itself to the position it occupies. The most gigantic intellect may be dwarfed by being cabin’d, cribbed and confined. It requires a great country and great circumstances to develop great men.”

Tupper read the Bible fully from cover to cover by the age of eight. His father Charles 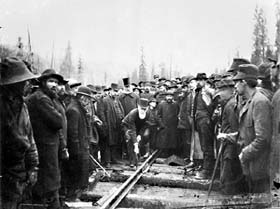 Tupper Senior, a prohibitionist, was one of the founding fathers of the fast-growing Maritime Baptist Churches. While training as a medical doctor in Edinburgh, Charles Jr discovered Scotch from which he never recovered.  Tupper served as first president of the Canadian Medical Association.

In 1867 the Halifax Morning Chronicle had described Tupper as “the most despicable politician within the bounds of British North America.”  Throughout his career Tupper was variously described as “the Boodle Knight,” the “Great Stretcher” (of the truth), “the old tramp,” the “Arch-Corruptionist,” and “the old wretch.”.

Tupper has the distinction of being the shortest-serving Prime Minister in Canadian history, even beating out Joe Clark and Kim Campbell (67 days!). His marriage, despite allegations of philandering, lasted longer than any other Prime Minister: 66 years!

Tupper, the longest-surviving Father of Confederation, served in six federal cabinet portfolios. If there was something that was really difficult to get done, somebody who needed to be won over, Macdonald often said: ‘Call Tupper.’ Tupper could make things happen.

In 1883 a British Columbia contractor close to Tupper was awarded a two million dollar job, even though rivals submitted lower bids. The opposition suspected a payoff. Tupper faced a legal challenge and demands for a full inquiry. He promptly left his retirement home in Vancouver and sailed for London, far from the cry of scandal, to take a diplomatic posting.

Sir Charles Tupper and Sir Leonard Tilley remind us that God can use the most unlikely people in building a nation.

-previously published in the Light Magazine and the North Shore News

2 thoughts on “Tilley and Tupper Our Founding Fathers”