How do you feel about the world-famous Mr. Van Rijn’s paintings?

Rembrandt Harmenszoon van Rijn is one of the few men or women in history recognizable from just his first name.  Others are Napoleon, Michaelangelo, and Cleopatra.  Today Rembrandt is known to hundreds of millions of people in all parts of the world.  Many art experts see him as the greatest of all Dutch painters, indeed as one of the greatest artists who ever lived.

By his subtle contrasts of light and dark, Rembrandt caused the people he painted to seem alive.  Theatre people often call Rembrandt the Shakespeare of painting –for his capacity to probe personality, his compassion for each person he depicts, and his feeling for grasping the dramatic moment and displaying it with moving effect.

ninth child of a well-to-do couple in Leiden, Holland.  While in his early 20’s, he developed an overnight celebrity status somewhat akin to the rise of the Beatles.  This brief time of prosperity and  popularity,however, was  followed by much sorrow and  rejection.  Championed as the Netherlands alternative to Peter Paul Ruben in Belgium, Rembrandt became very wealthy and over-extended.  Taking out an enormous mortgage on a beautiful house, he was accused of wasting his inheritance and living an indulgent lifestyle.

Rembrandt responded by painting himself with his wife Saskia, as a Prodigal Son/wealthy playboy with his latest female conquest.  As a young person, Rembrandt had all the attributes of the Prodigal Son: brash, overconfident, spendthrift, hedonistic, and very arrogant.  Money dominated and crippled much of his life.  He earned a lot; he consumed a lot; he wasted a lot.  Sadly, much of his energy and talent was depleted in protracted court cases about financial disputes and bankruptcy affairs.

Rembrandt’s best-known painting, the so-

called Night Watch, was both his greatest success artistically  and his worst failure relationally.  While painting the Night Watch, he made many people angry who would no longer buy his paintings.  The soldiers, who paid to be in the picture, all wanted to be front and centre. Instead of painting a typical group portrait, Rembrandt created a masterpiece where some soldiers were prominent and others were hardly visible.

Around that time, his wealthy heiress wife Saskia, whom he deeply loved and admired, died, leaving Rembrandt to care for his nine-month-old son, Titus.  Rembrandt had already lost his son Rumbartus in 1635, his first daughter Cornelia in 1638, and his second daughter Cornelia in 1640. Ten days before Saskia died, she changed her will so that Rembrandt would never be able to remarry without being disinherited.

After Saskia’s death, things worsened.  Rembrandt became involved in a very unhappy relationship with his housekeeper, Geertje Dircx.  When he refused to marry her, she took Rembrandt to court and won a settlement. In response, Rembrandt and Geertje’s own brother had Geertje confined to an insane asylum for the next five years.

Unable to marry, he then became involved in 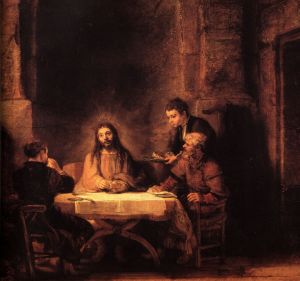 another scandal with his new housekeeper, Hendrickje Stoffels, whose pregnancy scared off even more of his Dutch customers.  His financial problems became so severe that in 1656 Rembrandt was declared insolvent.  All of Rembrandt’s possessions, his large collection of artwork, and his house in Amsterdam were sold in three auctions during 1657 and 1658.  In 1663, Hendrickje, who has been described as ‘one of the noblest souls to serve a troubled genius’, died.  Five years later, Rembrandt’s hopes were again raised and then dashed when he celebrated his son Titus’ wedding, only to see him buried that same year.  Only his daughter Cornelia, his daughter-in-law Magdalene van Loo, and his granddaughter Titia survived him.

Rembrandt became more and more fascinated with painting ‘old age’, as he felt that it often revealed the most about human nature.  Bludgeoned by tragedies that might have crushed a weaker man, Rembrandt achieved a new depth to his art.  Rembrandt was close to his death when he painted his Prodigal Son, seen by many as the last will and testament of a turbulent and troubled life.

In his Prodigal Son painting*, the essence of

love was concentrated in the hands.  When the famous author Henri Nouwen saw the Prodigal Son painting in the St Petersburg Hermitage, he was struck  by the sight of  “a man in a great red cloak tenderly touching the shoulders of a disheveled boy kneeling before him.  I could not take my eyes away.  I felt drawn by the intimacy between the two figures, the warm red of the man’s cloak, the golden yellow of the boy’s tunic, and the mysterious light engulfing them both.  But, most of all, it was the hands –the old man’s hands–as they touched the boy’s shoulders that reached me in a place where I had never been reached before.  …”  Nouwen realized that Rembrandt must have shed many tears and died many deaths before he could have so exquisitely painted the father’s heart for his lost son.  Rembrandt  had once again painted himself as the Prodigal Son, but this time coming back home to his Father.

Instead of the rich apparel with which the youthful Rembrandt painted himself in younger days, he now wore only a tattered undertunic covering his wasted body.  The Prodigal Son, like Rembrandt, returned to the Father with nothing: his money, his health, his honour, his self-respect, his reputation…everything had been squandered (Luke 15).  Yet the good news of Rembrandt’s painting was that the Father still loved him and welcomed him home unconditionally.

Rembrandt indeed saw himself as the 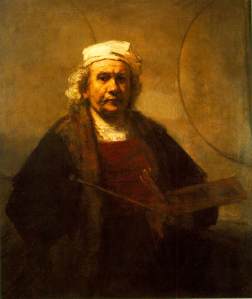 Prodigal Painter coming home to the true Father.  Rembrandt knew that he had wandered a long way, but that it was never too late to return home.  My prayer is that many of us may have the courage, like Rembrandt, to turn our hearts towards Home, where love and forgiveness are waiting.