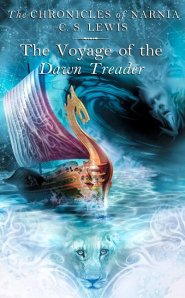 With CS Lewis’ Voyage of the Dawntreader having come out, Aslan Fever again swept the globe.

Who is Aslan anyways, and why are so many children of all ages so fascinated with him?  Having thoroughly enjoyed watching Disney’s The Lion, the Witch, and the Wardrobe, I was motivated to go back and re-read the Narnia Chronicles series. My family, when they were younger, eagerly watched the cartoon version of The Narnia Chronicles, and gained much from it.  But with the breakthrough in CGI technology, Aslan has taken on a new visual depth.

In the Narnia Chronicles: The Horse and His Boy, Aslan reveals himself as the one who keeps us from going over the edge, the one who stays with us day and night.  The young prince Shasta looked back after entering Narnia: “I must have gone through the pass in the night.  What luck that I hit it!  At least it wasn’t luck at all really, it was Him (Aslan). And Now I’m in Narnia.”  “Who are you?” asked Shasta.  “Myself”, said the voice, very deep and low so that the earth shook; and again “Myself”, loud and clear and gay; and then the third time “Myself”, whispered so softly you could hardly hear it, and yet it seemed to come from all around you as if the leaves rustled with it.”  Aslan was Himself, no more, no less.

In Narnia Chronicles: The Magician’s Nephew, we learn that Aslan sang creation into existence at the beginning of time: “The Voice rose and rose, till the air was shaking with it. And just as it swelled into the mightiest and most glorious sound it had yet produced, the sun arose…The Lion was pacing to and fro about that empty land and singing his new song…And as he walked and sang the valley grew green with grass. It spread out from the Lion like a pool…Soon there were other things besides grass…’Trees,’ Digory exclaimed.”

CS Lewis ‘created’ a world of endless snow in

the Narnia Chronicles.  Only when Aslan was slain for others by the White Witch did the snow start melting.  CS Lewis described his own spiritual breakthrough the same way: “I felt as if I were a man of snow at long last beginning to melt. The melting was starting in my back – drip-drip and presently trickle-trickle.  I rather disliked the feeling.”

Many people don’t realize that CS Lewis, a confirmed old bachelor, ended up becoming married because of Aslan.  Joy Davidman, a self-declared atheistic communist of Jewish heritage, loved to read the Narnia Chronicles to her sons.   In the process, she came to faith in Aslan, the Lion of the Tribe of Judah (Revelation 5:5).  Looking back, Joy Davidman commented: “My first published poem was called “Resurrection” — a sort of private argument with Jesus, attempting to convince him (and myself) that he had never risen. I wrote it at Easter, of all possible seasons, and never guessed why.”

As Joy Davidman wrote in ‘The Longest Way Round’, God “had been stalking me for a very long time, waiting for his moment; he crept nearer so silently that I never knew he was there. Then, all at once, he sprang.  For the first time in my life I felt helpless; for the first time my pride was forced to admit that I was not, after all, ‘the master of my fate’. All my defenses — the walls of arrogance and cocksureness and self-love behind which I  had hid from God — went down momentarily. And God came in.  Since childhood, I had been pouring half my energy into the task of keeping him out.  When it was over I found myself on my knees, praying. I think I must have been the world’s most astonished atheist.”

After coming to faith in Aslan the Lion of Judah, Joy escaped to England from her alcoholic, adulterous, wife-beating husband.  As told in the ‘Shadowlands’ movie, it was there that Joy met her Narnia hero, CS Lewis.  As a favour to a good friend, CS Lewis married Joy Davidman to keep her from being thrown out of the country because of her former communist background. As Joy began to battle terminal cancer, CS Lewis then fell in love with Joy for real and married her a second time in a Church wedding,.  Romantically CS Lewis adopted Joy Davidman’s children, one of whom, Douglas Gresham, is co-producer of the Narnia Chronicles movie blockbuster.

So who is this Aslan who transformed Joy Davidman’s life?  CS Lewis wrote to some Maryland fifth

graders in 1954: “I did not say to myself ‘Let us represent Jesus as He really is in our world by a Lion in Narnia’; I said, ‘Let us suppose that there were a land like Narnia and that the Son of God, as he became a Man in our world, became a Lion there, and then imagine what would happen.'”.  In the letter, sent to a child fan in 1961, Lewis writes: “The whole Narnian story is about Christ.” CS Lewis commented: “Since Narnia is a world of talking beasts, I thought he would become a talking beast there as he became a man here. I pictured him becoming a lion there because a) the lion is supposed to be the king of beasts; b) Christ is called ‘the lion of Judah’ in the Bible.”

My prayer for those reading this article  is that each of us, like CS Lewis and Joy Davidman, may open our hearts to the mysterious Aslan.