Who can forget the remarkable Vancouver 2010 Olympics?  Dr. William Barclay comments that perhaps the world’s most famous Olympic race is the marathon.  The original Battle of the Marathon in 490 B.C. was one of the decisive battles of the ancient world.  The Plains of Marathon, where the Greeks met King Darius I’s Persian army, were just twenty-two miles from embattled Athens.  Against fearful odds, the Greeks won the victory, and, after the battle, a Greek soldier ran all the way, day and night, to Athens with the news.  Straightway to the magistrates, he ran. “Rejoice,” he reportedly gasped,” we have conquered” and even as he delivered his message, he fell dead.  He had completed his course and done his work, and there is no finer way for any man to die.”

When Michel Bréal and Pierre de Coubertin suggested the idea of the marathon race to the first 1896 Athens Olympic Organizing Committee, the Greeks embraced the plan with eagerness. Here, after all, was a race that emerged from Greek history and celebrated the achievement of a Greek runner.  Against great odds, the first 1896 Olympic Marathon was won by a Greek, Spiridon Louis.  The nation of Greece exploded with joy!  Since there were no gold medals for the 1896 Olympics, Spiridon Louis was awarded with an olive branch, a silver medal and cup, as well as an antique Olympic vase. The same Pierre de Coubertin, inspired by a sermon at St. Paul’s Cathedral in London, wrote the following ‘creed’ for the Olympics: “The most important thing in the Olympic Games is not to win but to take part, just as the most important thing in life is not the triumph but the struggle. The essential thing is not to have conquered but to have fought well.”

Each one of us in our own way is running an Olympic marathon every day of our life. The Good Book tells us to ‘run with patience the race set before us.’ (Hebrews 12:1) Dr. William Barclay commented that “It is easy to begin the race of life but hard to finish. The one thing necessary for life is staying-power, and that is what so many people lack.  It was suggested to a certain very famous man that his biography should be written while he was still alive.  He absolutely refused to give permission, and his reason was: ‘I have seen so many men fall out at the last lap.’ It is easy to wreck a noble life or a fine record by some closing foolishness.”

Probably one of the most famous ‘Olympic runners’ is the apostle Paul, a former Rabbi who was knocked off his horse while racing to Damascus, Syria.  Paul spent the next thirty years ‘running’ throughout the Roman Empire telling people the good news.  Paul, the prolific writer, wrote more chapters of the New Testament than any other individual (74 chapters singlehanded!) He often used Olympic Marathon language to communicate his heart: “Do you not know that in a race all the runners run but only one gets the prize? Run in such a way as to get the prize.  Everyone who competes in the games goes into strict training. They do it to get a crown of laurel that will not last; but we do it to get a crown that will last forever.  Therefore I do not run like a man running aimlessly…” (1st Corinthians 9:24-26).  Paul had been in and out of jail many times, escaping death again and again.  He was always on the run! By the end of Paul’s life, the crazed Emperor Nero was on the warpath, and Paul knew that the only way out of jail was by beheading.

Even though Paul was designated for the

‘chopping block’, he didn’t panic, but stayed focused on his spiritual ‘Olympic Marathon’.  Ironically Paul told his young protégé ‘runner’ Timothy to ‘keep his head in all circumstances’ (2 Timothy 4:5).

Paul knew that he was about to die.  “Now”, said Paul, “is the time for my departure”.  The Greek word for departure is analusus –like our word ‘analysis’ which means ‘a separating of items from each other’. It was used for loosening the ropes of a ship when weighing anchor. It was also used of a camper packing up his tent, and for a farmer unyoking an animal from its plough.  Paul was saying that death was not the end; rather it was a moving on to the next adventure.

Paul’s dying words were profoundly Olympian: “I have fought the good fight, I have finished the race, I have kept the faith.” As Bishop Michael Baughen depicts it, “The relay runner is pounding round the track, using every ounce of energy, heading for the hand-over point.  Ahead of him is the next runner in the relay, feet beginning to move in anticipation, eyes on the runner coming towards him,  his hand now outstretched to take the baton at the appropriate moment and then to run and run, while the man he took 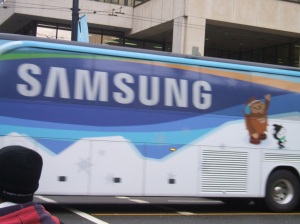 the baton from collapses breathless on to the grass.  Paul is pounding towards the end.  His ‘time of departure has come’ and Paul is urging Timothy to take the baton from him and to run with commitment and determination.”

As the Vancouver Olympics has faded into pleasant memories, how is your daily marathon doing? Are you stretching each day towards the finish line? Are you preparing another young Timothy that you can pass the baton to, when you finish the race of life?  Are you running the race of life in such a way as to get the prize?