“Nothing exceeds halitosis as a social offense.  Nothing equals Listerine® as a remedy.” Such was the claim of a 1928 advertisement for Listerine ® mouthwash. Listerine® Antiseptic mouthwash, wasn’t born in the bathroom, however, but in the operating room.

Back in 1865, Dr. Joseph Lister, the son of a well-known physicist, first demonstrated the use of an antiseptic in surgery.  Later, Dr. Joseph Lawrence refined his product and named it Listerine® after Dr. Lister.  History is uncertain whether Lister appreciated the favour.

One hundred and thirty years ago, almost 50% of the patients undergoing major surgery died from infection. As the famous saying went, “The operation was a success, but the patient died.”  In the 1870’s, Lister was the first to treat wounds with dressings soaked in carbolic acid.  Lister, in agreement with Dr. Louis Pasteur, suggested surgeons wash their hands and sterilize their instruments before operating.  After significant resistance, British and American hospitals gradually adopted the sterile procedures promoted by Lister.

by the medical establishment.  When Pasteur was publicly honoured at age 70 by his medical peers,  he turned and bowed his head towards Lister, saying: “the future belongs to him who has done the most for suffering humanity.”

Lister has been described as the greatest man of the nineteenth century.  Even the common Bandaid, created by Johnson and Johnson, can be directly traced to Lister’s influence.

In the days before Lister, the death rate from amputation, the most frequent ‘major’ operation in his day, was forty percent.  By 1910, thanks to Lister’s influence, the death rate from amputation had dropped to less than three percent.  How many of us had relatives who were injured in World War One or Two, relatives who might not had survived without Lister’s contributions?

One of the most feared accidents a hundred years ago was the compound fracture, where the sharp end of the broken bone pierced the skin.  Because it so often resulted in death from infection, most doctors would immediately amputate the victim’s arms and legs.  When I think about how many of our teens have come back from Mount Seymour and Grouse with compound fractures from skiing or snowboarding, I give thanks for Joseph Lister.

Back then, surgeons did not wear gowns or 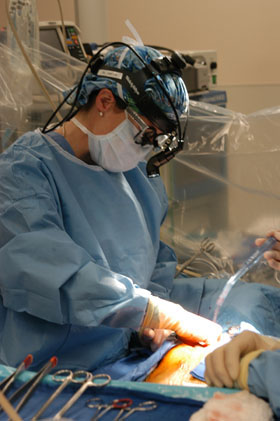 gloves, nor did they cover their hair with caps or their noses and their mouths with masks.  The result was that the patient was in danger of infection, not from ‘bad air’ as they thought, but from the surgeon’s hands, his clothes, his breath, and his hair.   Lister had heard that ‘carbolic acid,’ a coal-tar derivative used to preserve railway tracks and ships’ timbers, was effective in treating sewage in Carlise, and in curing cattle of parasites.  By cleaning wounds and dressing his patients with carbolic acid, Lister was able to keep his hospital ward in Glasgow free of infection for nine months.  Lister’s cloud of carbolic spray drenched the whole area, surgeon and all, and so killed the bacteria before they had a chance to invade the wound.

Carbolic spray, however, was caustic to the skin and body tissues, and sometimes caused poisoning.  The surgeon’s skin would become bleached and numb, his nails cracked, and his lungs sore as he breathed in large quantities of carbolic.  Some surgeons became so ill that they had to give up using the spray entirely.  Even Lister described it as ‘a necessary evil incurred to attain a greater good.’ After many experiments, he found that boracic acid was a better antiseptic.

Because of his new fame, Lister was invited to leave Edinburgh and join the prestigious King’s College Hospital in London.  The newspapers reported Lister as saying that it was his duty to go to King’s because the teaching of surgery in London was very bad.  Such publicity did not go down well with his future London colleagues.  “Who is this ignorant professor from an insignificant Scottish University,” they said, “that he should dare to criticize the great London teaching-schools?”

Lister also made himself unpopular by 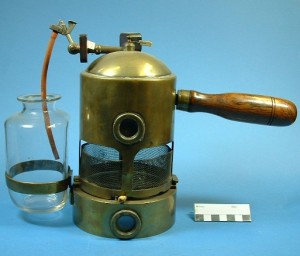 insisting for hygienic reasons that his wards should be separated from all other wards, and that they should not be shared by any other surgeon.  He even had the nerve to bring his own personally trained staff with him from Edinburgh.  Little by little however, Lister won the English over.

Dr. Frederick Cartwright, a Fellow in the Royal College of Surgeons, holds that Lister “was a humble servant of God, and that he always asked for His guidance in moments of difficulty.  There is no doubt that he believed himself to be directly inspired by God…To Lister, the operating-theatre was a temple.” Lister was very humble, but also very brave and determined.  In spite of all the opposition that he faced, he never gave up because he knew that God was guiding him to help humanity.

My prayer for those reading this article is that the ‘Great Physician’ Jesus may empower each of you, like  Joseph Lister, to be ‘revolutionaries’ for the healing of our homes and families.