By the Rev. Dr. Ed and Mark Hird

Who was Louis Riel?  Was he a patriot or a dissident or both?

Louis Riel was born at St. Boniface (Winnipeg, Manitoba) on October 22nd 1844, inheriting from his father a mixture of French, Irish and Aboriginal blood, with French predominating.

Louis’ mother Julie sent her son Louis to become Canada’s first Metis priest.  The 1864 death of his father however weighed heavily on Louis, bringing about an abrupt end to his seminary training.  Four months from becoming a priest, Louis met a young Montreal girl, fell in love, and decided to marry.  He rashly left the College of Montreal without obtaining his degree, and then his marriage plans collapsed when his fiancée’s parents forbade this proposed union with a Metis.  Embittered by this racist-rejection, Riel left Montreal in 1866 – without a wife, without a career, without money. 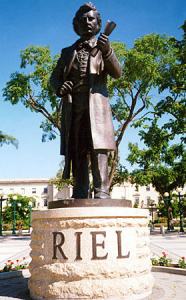 Without adequately consulting the local 12,000 Red River people, the Hudson Bay Company sold the Red River settlement to Eastern Canada.  Louis Riel rallied the Metis people in 1869 to take over the local Fort Garry, the Western nerve centre of the HBC.  Riel’s goal was to force the Federal Government to negotiate Manitoba’s admission into Confederation as a full province, not just a territory. The provincial name Manitoba, rather than the expected territorial name Assiniboia, came from Louis Riel himself.

Louis Riel proclaimed that the Metis were ‘loyal subjects of Her Majesty the Queen of England’. “If we are rebels, said Riel, “we are rebels against the Company that sold us, and is ready to hand us over, and against Canada that wants to buy us.  We are not in rebellion against the British supremacy which has still not given its approval for the final transfer of the country…We want the people of Red River to be a free people…”

Donnelly, a former Lieutenant Governor of Minnesota, said: ‘If the revolutionists of Red River are encouraged and sustained…, we may within a few years, perhaps months, see the Stars and Stripes wave from Fort Garry, from the waters of Puget Sound, and along the shore of Vancouver.’  In the summer of 1870, Nathanial F. Langford and ex-governor Marshall of Minnesota visited Riel at Fort Garry.  They promised Riel $4 million cash, guns, ammunition, mercenaries and supplies to maintain himself until his government was recognized by the United States.  Riel declined.

After William O’Donohogue ripped down the Union Jack, Riel immediately reposted the Union Jack with orders to shoot any man who dared touch it.  Despite his rebellious reputation, Louis Riel showed himself to be a Canadian patriot who single-handedly kept Western Canada from being absorbed by the USA.  Riel prayed in his diary: “O my God!  Save me from the misfortune of getting involved with the United States.  Let the United States protect us indirectly, spontaneously, through an act of Providence, but not through any commitment or agreement on our part.”  Riel also prophetically noted in his diary: “God revealed to me that the government of the United States is going to become extraordinarily powerful.”

“The Metis are a pack of cowards”, boasted

Thomas Scott, “They will not dare to shoot me.” If it was not for Riel’s sanctioning of the tragic shooting of the Orangeman Thomas Scott, he might have ended up in John A Macdonald’s federal Cabinet.  Thomas Scott’s death made Riel ‘Canada’s most hated man’.

After fleeing to the United States, Riel was then elected in his absence as a Manitoba MP. The Quebec legislature in 1874 passed a unanimous resolution asking the Governor-General to grant amnesty to Riel.  That same year, after Louis Riel’s re-election as MP, he entered the parliament building, signed the register, and swore an oath of allegiance to Queen Victoria before slipping out to avoid arrest.  The outraged House of Commons expelled him by a 56-vote majority.

Exiled to Montana, Riel married and became a law-abiding American citizen. In 1884, with the slaughtering of the buffalo, many First Nations and Métis were dying of hunger.  The Metis in Saskatchewan convinced Riel to return to Canada.  Riel sent a petition to Ottawa demanding that the Metis be given title to the land they occupied and that the districts of Saskatchewan, Assiniboia and Alberta be granted provincial status.  The Federal Government instead set up a commission.  In the absence of concrete action, Louis Riel and his followers decided to press their claims by the attempted capture of Fort Carlton.

Due to the Canadian Pacific Railway, my great-grandfather Oliver Allen was shipped with the Toronto militia to quickly defeat Riel at Batoche.  Using an American Gatling gun with 1,200 rounds a minute, the battle did not last long.  While in the West, Oliver Allen met his future wife Mary Mclean a Regina Leader news-reporter sympathetic to Louis Riel.  Right before Riel’s hanging, Mary Mclean disguised herself as a Catholic priest in order to interview Riel.  Before Riel died, he prayed in his diary: “Lord Jesus, I love you.  I love everything associated with You…Lord Jesus, do the same favour for me that You did for the Good Thief; in Your infinite mercy, let me enter Paradise with You the very day of my death.”

. For mailing the book to the USA, please send $20.00 USD.  This can also be done by PAYPAL using the e-mail ed_hird@telus.net . Be sure to list your mailing address. The Battle for the Soul of Canada e-book can be obtained for $4.99 CDN/USD.