Vancouverites put tremendous energy into the Winter Olympics.   The lengthy preparations were indeed a marathon.

The world’s most famous Olympic race is the marathon.  The original Battle of the Marathon in 490 B.C was just twenty-two miles from embattled Athens.  A Greek soldier ran all the way, day and night, to Athens to give his dying words: “Rejoice. We have conquered”.

In 1896, the modern-day Olympics were revived in Greece, spreading throughout the globe.  Each one of us in our own way is running an Olympic marathon every day of our life. The Bible tells us: “Run with patience the race set before us.” (Hebrews 12:1)  Dr. William Barclay commented: “It is easy to begin the race of life but hard to finish. The one thing necessary for life is staying-power, and that is what so many people lack.  It was suggested to a certain very famous man that his biography should be written while he was still alive.  He absolutely refused to give permission, and his reason was: ‘I have seen so many men fall out at the last lap.’  It is easy to wreck a noble life or a fine record by some closing foolishness.”

There were many gold medals won  by Canadian athletes.  Winning is exciting.  Many athletes realized that the Olympics are about more than gold, more than just winning.  Olympics co-founder Pierre de Coubertin, inspired by a sermon at St. Paul’s Cathedral in London, wrote the following ‘creed’ for the Olympics: “The most important thing in the Olympic Games is not to win but to take part, just as the most important thing in life is not the triumph but the struggle. The essential thing is not to have conquered but to have fought well.”  The Christian community in Greater Vancouver came together for the Olympics across denominational and ethnic barriers to affirm that life is about 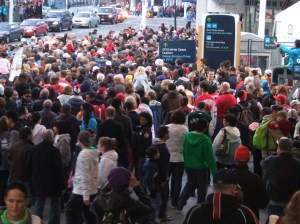 more than gold.   The wider Christian community played its part in truly welcoming the world to Vancouver.  Many athletes shared their experiences of what it is like to win medals, and what is worth more than gold to them. You can watch them online.

Probably one of the most famous ‘Olympic runners’ is the apostle Paul, a former Rabbi who was knocked off his horse while racing to Damascus, Syria. He often used Olympic Marathon language to communicate his heart: “Do you not know that in a race all the runners run but only one gets the prize? Run in such a way as to get the prize.  Everyone who competes in the games goes into strict training. They do it to get a crown of laurel that will not last; but we do it to get a crown that will last forever.  Therefore I do not run like a man running aimlessly…” (1 Corinthians 9:24-26).

Paul’s dying words were profoundly Olympic: “I have fought the good fight, I have finished the race, I have kept the faith.” As Bishop Michael Baughen depicts it,

“The relay runner is pounding round the track, using every ounce of energy, heading for the hand-over point.  Ahead of him is the next runner in the relay, feet beginning to move in anticipation, eyes on the runner coming towards him,  his hand now outstretched to take the baton at the appropriate moment and then to run and run, while the man he took the baton from collapses breathless on to the grass.  Paul is pounding towards the end.”

The Vancouver Olympics came in like a storm and then was gone.  The Gold medals were soon a distant memory. The lasting question is how your daily marathon is doing? Are you stretching each day towards the finish line?  Are you running the race of life in such a way as to get the prize? Life is truly about more than gold.

My prayer for the various Olympics around the world  is that the love of God will pour through us in the gift of hospitality so that the world will come to know the prize that lasts forever.