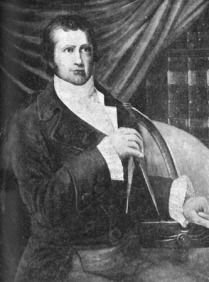 One of the best things that ever happened to the famous BC explorer David Thompson was when a large log rolled from a sleigh and crushed his leg.  All things really did work for the good through that tragedy (Romans 8:28).  His broken leg gave him time to learn math, science, and instruments of surveying, how to keep field notes and journal-keeping.  As a result, David Thompson learned the necessary skills which enabled him to put Western Canada on the map.

The early 19th century Western Canada map was essentially blank until Thompson filled it in.  Thompson was one of the master-builders of Canada and possibly the greatest geographer the world has known. As a land geographer, Thompson was the peer of Captain James Cook, the great sea geographer of the oceans.  Thompson has been described as a great surveyor disguised as a fur trader, as a marvelous scientist with the sensitive soul of a prophet.

By his own initiative and industry, he explored and surveyed more than a million and a half square kilometres of wilderness,

accomplishing the staggering feat of mapping half a continent. Even Alexander Mackenzie, the renowned explorer, was quite astounded and remarked that Thompson had performed more in ten months than he expected could have been done in two years.  Thompson’s map, his greatest achievement, was so accurate that 100 years later it remained the basis for many of the maps issued by the Canadian government and the railway companies.  We can even credit David Thompson with the exacting survey of much of the Canadian/US 49th Boundary.

Thompson’s written ‘Travels Journal’ shows his multifaceted gifts as scientific explorer, geographer, cartographer, and naturalist.  Some scholars have described Thompson’s Journal as one of the finest works in Canadian literature.  His directness in prose, his modesty and ability to see himself and others, his sharp powers of observation and intense practicality all contribute to a vivid glimpse of early Canadian pioneering. His account of his adventures has also been described as one of the world’s greatest travel books.

When David was only two years old, his father died and his mother moved to London, changing their Welsh name ApThomas to the more easily spoken Thompson.  When David

moved to Canada, he never saw either his family or London town again.  In his journal, David wrote movingly of a ‘long and sad farewell to my noble, my sacred country, an exile for ever’.

Thompson the Canadian immigrant grew to love ‘the forest and the white water, the shadow and the silence, the evening fire, the stories and the singing and a high heart.’  He was modest, talented and deeply spiritual.  The First Nations people gave him the name Koo-Koo-Sint, which means ‘Star-Gazer’, in recognition of his star-based map work.  It wasn’t that he was a starry-eyed dreamer, but rather a dedicated scientist using the best mapping technology of his day.

David Thompson apprenticed with the Hudson’s Bay Company, but later switched to the competitors, the North West Company, because the Hudson’s Bay Company wanted him to focus on furs, not map-making. The North West Company appointed Thompson as their official ‘Surveyor and Map Maker’, and proudly displayed his finished map of Canada on their boardroom wall. 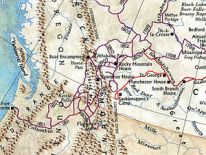 Thompson’s brother-in-law, John McDonald, considered Thompson a good trader, a fearless traveler, and a man who was liked and respected by the First Nations.  His few criticisms of his brother-in-law had to do with his spirituality, his passion for surveying, and his total unwillingness to drink or to sell liquor when dealing with customers.  Thompson had seen so many First Nations people harmed by the liquor trade that he had acquired a strong aversion to such profiteering.

Unlike many Nor-Westers, Thompson did not abandon his wife Charlotte and his family when he finally became wealthy.  David and Charlotte Thompson, who had seven sons and six daughters, were only parted by his death fifty-eight years after their marriage.

Thompson tried in vain for years to find a profitable trade route to the Pacific.  Upon hearing that the American Jacob Astor had sent out his sea and land expedition to the Oregon country, the Canadians sent David Thompson to try once again.  Thompson and his voyageurs bravely made their way down the Columbia River.  They were continually wet up to the middle, and exposed to cold highwinds.  The glacier water deprived them of all feeling in their limbs.  Despite such hardships, Thompson never gave up, instead writing in his Journal that they ‘continued under the mercy of the Almighty and at sunset put up, each of us thankful for our preservation’.

When they finally reached the Pacific watershed, Thompson knelt on the banks of 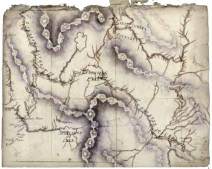 the Blueberry Creek and prayed aloud: ‘May God in his mercy give me to see where these waters flow into the ocean, and let us return in safety.’  He and his voyageurs eventually did make it to the mouth of the Columbia River, but unfortunately arrived there after Jacob Astor.  One can speculate that if David Thompson had been a little quicker, the name ‘British Columbia’ might have been a more accurate description of our province.

Despite Thompson’s great success in canoeing to the mouth of the Columbia and in mapping most of Western Canada, he died in extreme poverty and obscurity, even having to pawn his beloved surveying equipment and his overcoat to buy food for his family.  Yet throughout the hardships, Thompson never stopped gazing at the Morning Star, Jesus Christ.  I give thanks for David Thompson the Star-Gazer who did so much for every one of us as Canadians and British Columbians.