Sir Alexander Mackenzie ranks as one of the most remarkable persons of North American wilderness history and, indeed, as one of the greatest travelers of all time.  His transcontinental crossing predated (and indeed inspired) the more famous Lewis and Clark American expedition by twelve years.  Even Bernard De Voto, the well-known Utah-born historian said of Mackenzie, “In courage, in the faculty of command, in ability to meet the unforeseen with resources of craft and skill, in the will that cannot be overborne, he has had no superior in the history of American exploration.”

Mackenzie realized the dream of a Canada stretching from sea to sea.  Beneath the lion and the unicorn supporting the coat of arms of Canada are the Latin words: A MARI USQUE AD MARE, taken from a Biblical text, ‘He shall have dominion also from sea to sea and from the river to the ends of the earth. Without Alexander Mackenzie (and his Nor’Wester friends Simon Fraser and David Thompson), Canada would have lost her entire Pacific Coast, being shut off from any access to the sea.

In 1764, Alexander Mackenzie was born in Stornoway on the Isle of Lewis, a windswept, rugged island in the Outer Hebrides off the west coast of Scotland.  When Alexander was ten, his mom died.  Neighbours, knowing he had memorized long passages from the Bible, predicted that Alexander would become a clergyman. Through the local pastor’s library, he learned about astronomy and the use of telescopes.  At age 13, Alexander tabulated all the animal and plant life in the Hebrides, and he and his pastor tried unsuccessfully to get it published in London.

To escape the grinding poverty, his family, like thousands of other Highlanders, moved to the New World, only to become caught up in the American Revolution.  His father, like Simon Fraser’s dad, joined a United Empire Loyalist regiment near New York, before escaping with his family to Montreal. In those days, every one of Montreal’s 4000 inhabitants was involved in some way with the fur trade.  To young Alexander Mackenzie, the Montreal-based North West Company fur trade signified adventure, a chance to travel and explore new territory.

The heart of the fur industry was the

voyageurs, who were the heroes and athletes of the 18th century.  As with the NHL, a voyageur was an old man at forty and forced to retire.

A good voyageur paddled 40 strokes to the minute and could keep up that pace from dawn to dusk with brief stops.  They had the reputation of being the finest canoeists in the world, who could travel anywhere.  Most of the North West Company’s 1,100 voyageurs were Canadians, which in those days meant that they were Quebec-born francophones.  The Northwest Company brought together a unique blend of Canadians and Scots like Simon Fraser and Alexander Mackenzie.  At the height of the North West Company, it had eight times as many men in Western Canada as the more cautious Hudson’s Bay Company. 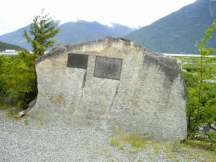 Mackenzie the Scottish Bulldog was above all things resilient.  Rather than give up his Pacific quest, he went to England to improve his knowledge of astronomy and geography.  Upon returning to Canada, Mackenzie once again struck out towards the Pacific Ocean, known by some First Nations as the ‘Stinking Lake’.  This time he traveled down the Peace River and the Parsnip River before trekking the final distance over the ‘Grease Trail’, traveled by the First Nations for countless generations.  Once again his victory was bitter-sweet. Yes, he had succeeded in reaching Bella Coola on the Pacific Ocean.  But like Simon Fraser, he too had discovered a route that was useless as a fur-trading canoe highway.

Following his two epic journeys to the Arctic and the Pacific Oceans, Mackenzie wrote an instant best-selling book called Voyages.  His book was so popular with the English and Germans that the publisher could not print enough copies to keep up with the demand.  During this time, he went back to England, became friendly with the Prince of Wales, and was knighted by his father King George IV.  That winter and spring, Sir Alexander was the most popular man in London. No social event was considered a success unless he attended it.

Between his book sales and his fur trading, Mackenzie became one of Canada’s wealthiest men. He even spent a brief period in Canadian politics which ‘bored him to tears’.  He also founded his own fur-trading ‘XY Company’ and tried unsuccessfully to do a corporate takeover of the failing Hudson’s Bay Company. 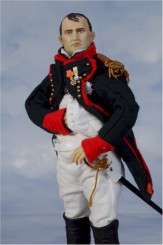 was an unwitting ‘accomplice’ in Napoleon’s planned re-conquest of Canada.  Napoleon had Mackenzie’s book smuggled from England and translated into French.  Mackenzie’s description of the Western Canada river system was so precise that Napoleon had set up a scheme during the War of 1812 to use Mackenzie’s book to invade Canada.  Canada would be conquered by a surprise attack from New Orleans, up the Mississippi River.  Fortunately for Canada, Napoleon ended up invading Moscow rather than Ottawa.

My prayer is that Jesus may raise up many more Alexander Mackenzies, people with bull-dog persistence, inexhaustible energy, and insatiable curiosity.