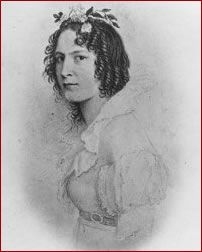 Catharine Parr Traill was a pioneer Canadian mother who made a phenomenal impact on the life of our nation.

England in the early 1830s was caught in a Canada-mania.  In the aftermath of the Napoleonic wars, England was thrown into an economic depression.  Thomas Strickland, the father of Catherine Parr Traill, was caught in the economic downturn, resulting in near-bankruptcy and his premature death.  He left behind an impoverished widow and six unmarried daughters whose chances of marriage were seriously limited. 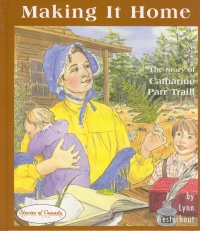 Both Catherine Parr Traill and her sister Susanna married economically-challenged Scottish soldiers who were offered land grants in the colonies.  Canada began to be seen as the land of milk and honey!  Altogether 655,747 people sailed away from British shores between 1831 and 1841 (almost three times as many as had moved abroad during the previous ten years).

The two key Canada-promoters William Cattermole and Captain Charles Stuart were being paid so much per head for every Brit that they could recruit for Canada.  In their glowing description of Canada, Cattermole and Stuart forgot to mention the backbreaking work required to clear the forests, the total absence of household comforts, the aching loneliness, and the grinding poverty of most early Canadian pioneers.  Catharine Parr Traill and her sister Susanna, being gifted writers, were able to record a vital part of our Canadian pioneering history.  In Catherine Parr Traill’s book ‘The Canadian Settler’s Guide’, she insightfully wrote:

“In cases of emergency, it is folly to fold up one’s hands and sit down to bewail in abject terror: it is better to be up and doing.”

Catharine’s book The Backwoods of Canada quickly sold its first printing of eleven thousand copies, being translated into German in 1838 and French in 1843.

Of the six Strickland daughters including Catherine, five of them became published authors!  Catharine’s older sister Agnes in England was the leading royal biographer of the 19th century.  Sister Agnes caustically commented: “Who in England thinks anything of Canada?” and “Nothing that is first published in Canada will sell well in England”.

In Charlotte Grey’s book Sisters in the Wilderness, Catharine Parr Traill and her sister Susanna are described as laying “the foundation of a literary tradition that still endures in Canada: the pioneer woman who displays extraordinary courage, resourcefulness and humour.  This ‘Canadian character type’, as critic Elizabeth Thompson calls her, is a pragmatist who discovers her own strength as she overcomes adversity.”  Sir Sandford Fleming, inventor of one-hour time zones, and the engineering genius behind the Canadian Pacific Railway, said of Catharine: “She has rendered service of no ordinary kind in making known the advantages offered by Canada as a field for settlement, and by her very widely read writings she has been instrumental in inducing very many emigrants from the United Kingdom to find homes in the Dominion.”

Catharine Parr Trail had a remarkable ability to rise above adversity and make the best of every situation.  Charlotte Grey: writes in her book about ‘the stamina, talent and determination that allowed two English ladies to overcome the hardships of pioneer life and leave a powerful legacy to Canadian culture.’  It is hard for us almost two hundred years later to fully imagine the miseries of hunger, disease, cold, and disappointment faced by our early Canadian pioneers.  I was shocked to discover that both Catharine and her sister’s families came down with malaria, a widespread problem in Canada as pioneers were struggling to drain mosquito-infested swamps.

Catharine Parr Traill commented in the early days: “I have not seen a woman except those in our company for over five months….”  As Charlotte Grey put it, “Being wrenched from one’s homeland leaves deep scars in the psyche of every emigrant in any era:  Susanna and Catharine bore these scars for the rest of their lives.” 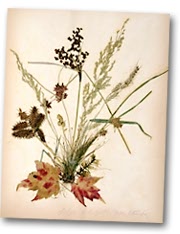 And Perseverance!’.  She would assure her relatives back home that Canada is the ‘land of hope.’ Her sister Sarah spoke of Catherine/Kate: “Her blue eyes always sparkled with happiness and curiosity about the world.  She had a warm smile and an air of stolid contentment, and even as a baby, Catharine ‘never cried like other children –indeed we used to say that Katie never saw a sorrowful day – for if anything went wrong, she just shut her eyes and the tears fell from under the long lashes and rolled down her cheeks like pearls into her lap.  We all adored her.”

Charlotte Grey commented how Catharine loved “the wild and picturesque rocks, trees, hill and valley, wild-flowers, ferns, shrubs and moss and the pure, sweet scent of pines over all, breathing health and strength.”  Nature, for Catharine, was saturated with divine meaning – its splendor and concord displayed the authority and goodness of its Creator.  That is why Catharine wrote many “books that reflected sheer love of nature’s bounty and admiration in God’s handiwork.”  The flowers of the field, for her, were good reminders of the teachings of Christ.  Catherine often illustrated her dried specimens with biblical quotes, particularly from the Psalms or the book of Revelation.

Charlotte Grey commented that in future years, Catharine would rely on her love of nature, the beauties of which she saw as the expression of God’s will, to carry her through one disaster after another:
“Strength was always given to me when it was needed.” As she dug and weeded in the kitchen garden, or lifted heavy cast-iron pans of porridge from the stove, she would pause briefly, straighten her aching back, close her eyes and utter silent prayers.  She noted at the end of her life: “In great troubles and losses, God is very Good.”

In the midst of her very busy writing and pioneering, Catharine never neglected her family.  As Charlotte Grey put it, “Motherhood came as naturally to Catharine as breathing.  It was the most meaningful activity in her life.  She was always prepared to give more love than she took, and she saw no conflict between her family and her impulse to write.”

My prayer is that every mother reading this article would receive that same strength as Catharine Parr Traill in the challenges of life.