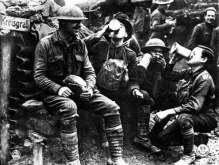 My Grandma Allen (we called her Nana) was one of the most loving people that I have ever known.  I often wondered as a young person what made her so faithful and caring.  Years later, I discovered that her strong faith developed through great trial and adversity in her life.  Her mother died while giving birth and her father gave the children away to the neighbours and went back to sea.  Two of her brothers Charlie and Harry both went off to war in World War 1 and never came back.

On November 19th, 1917 a caring chaplain wrote my Nana the following note:  “Dear Miss Williams, I dare say you have heard the sad news of the death of your brother Private H.C.W. Williams who was killed in action on the morning of November 6th.  He did not suffer as death was instantaneous.”

“No doubt you will feel the loss of your dear brother very much as it is hard to part with those we love; but it is a consolation to know he did his duty faithfully and died in a righteous cause.  He gave his life for others.  And ‘greater love has no man than this, that a man lay down his life for his friends.’”

“I pray that God will comfort you in your sad bereavement and may you find his grace sufficient in your hour of need.  Cast your cares on the Lord and he shall sustain you.  With Deepest Sympathy, Yours sincerely, Alex Ketterson Chaplain 29th Canadians, B.E.F.” 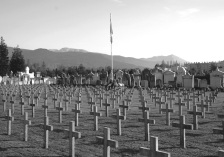 Ketterson was a tremendous comfort to my Nana, because he understood the great sacrifice that her brothers Charlie and Harry made for the cause of freedom.  Chaplain Alex Ketterson knew that the mystery of Jesus’ sacrifice on the cross can help us make sense of the senselessness of life.

For more than forty years, I have worn a poppy each November 11th.  It helps me remember and reflect on the great sacrifices by so many that we might be free.  It is so easy to take freedom and security for granted.  Freedom and democracy are a precious gift from God that must never be treated lightly.  I wear a poppy ‘lest I forget’.

How did the poppy become connected with Nov 11th anyways? A writer first made the

connection between the poppy and battlefield deaths during the Napoleonic wars of the early 19th century, remarking that fields that were infertile before battle exploded with the blood-red flowers after the conflict ceased.

During the massive  military barrage of World War One, the chalk soils became loaded with lime from debris, allowing ‘popaver rhoeas’ (poppies) to blossom. When the war ended the lime was quickly absorbed, and the poppy began to disappear again.

During World War One, Lieutenant-Colonel John McCrae, of Guelph Ontario, heroically served as brigade-surgeon to the First Brigade of the Canadian Forces Artillery.  With the introduction by the enemy of poison gas, John McCrae worked night and day for seventeen days straight, not even stopping to change his clothes. At times the dead and wounded actually rolled down the bank from above his Yser Canal dugout. McCrae wrote home “We are weary in body and wearier in mind. The general impression in my mind is one of a nightmare”.

The day before John McCrae wrote “In Flanders Fields”, one of his closest friends

was tragically killed and buried in a grave decorated with only a simple wooden cross.  Wild poppies were already flourishing between the crosses that marked those silent graves.  In Flanders Fields” was first published in December, 1915 in England’s “Punch” magazine.  Within months, “In Flanders Fields” became the most popular poem about the First World War.  Translated in several languages, it was used in a 1917 Canadian campaign to help with the war effort, an effort which remarkably raised over 400 million dollars.

Three years later a New York City YMCA worker, Moina Michael decided to begin wearing a poppy in memory of the millions who died on the battlefield.  Thanks to a 1920 visit to New York, Madame Guerin of France learned of the New York City poppy.  The poppy symbol so inspired her that upon returning to France, she made handmade poppies to raise money for French children made destitute by World War 1.  From there, the poppies spread like wildfire around the world.

“In Flanders fields the poppies blow
Between the crosses, row on row,
That mark our place; and in the sky
The larks, still bravely singing, fly
Scarce heard amid the guns below.”

Why do 13 million Canadians wear a poppy on November 11th?  We wear the poppy, lest we forget.  My prayer is that we may overcome our collective amnesia and remember afresh the sacrifices of so many who gave their lives that we might live.