Many of us enjoyed the Valkyrie movie which showed the courage of those who sacrificed life and family to put an end to Nazism.  Dietrich Bonhoeffer, though not mentioned directly in the movie, was instrumental in the Valkyrie plot to stop Hitler.  Martyred for his faith just 23 days before the Allies liberated Germany, Bonhoeffer’s last poem and his Barmen Declaration are printed in the ‘Lutheran’ hymnbook.[1]

Coming from a highly educated, aristocratic family, Bonhoeffer shocked his family by deciding to become a pastor.[2] Bonhoeffer was spiritually impacted by his Moravian Brethren ‘nanny’ Maria Horn who introduced him to the practice of having daily devotions.[3] After earning his doctorate at age 21, Bonhoeffer moved to the United States where he encountered African-American gospel music and preaching at the 14,000-member Abyssinian Baptist Church in Harlem, NY.  The Abyssinian Church was led by Dr Adam Clayton Powell Sr, the son of slaves whose mother was a full-blooded Cherokee.  Dr Powell told a powerful story of his conversion to Christ from heavy drinking, violence and gambling.[4] Bonhoeffer was deeply moved by Dr Powell, saying “…here one can truly speak and hear about sin and grace and the love of God…the black Christ is preached with rapturous passion and vision.”[5]

Moving back to Germany in 1931, Bonhoeffer warned people about the dangers of Nazism, but many brushed off his prophetic statements as alarmist.  The Nazis worked carefully to first silence and then take over the Churches in Germany, birthing a movement called the German Christian Movement which discarded the Old Testament, putting the swastika at the centre of the cross.[6] At the Berlin Sports Stadium in 1933, in front of 20,000 supporters, the cross was denounced as ‘a ridiculous debilitating remnant of Judaism, unacceptable to National Socialists.’[7]  Nazis believed that it was un-aryan to let Jesus take our sins on the cross. 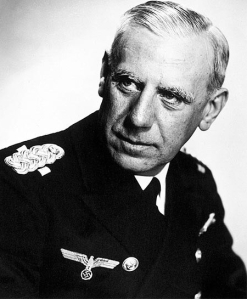 In 1938, Bonhoeffer quietly contacted Admiral Wilhelm Canaris who was involved in the German resistance movement. As the leader of the Abwehr Intelligence, Canaris was seeking for a way to remove Hitler.[10]  After the annexation of Austria and the destruction of over three hundred synagogues and 7,500 Jewish-owned businesses on the night of Kristallnacht, Bonhoeffer was persuaded to return to the United States. His friends were sure that Hitler was about to destroy Bonhoeffer.  He had no peace in the USA, knowing that Germany needed him.  Bonhoeffer opened his bible to the verse: He who believes does not flee. After only four weeks, he embraced his destiny, taking the last ship back to Germany.[11]

After the invasion of Poland and then France, Bonhoeffer was now required to report regularly to the police. He was forbidden to speak in public or publish books.[12] In 1943, while working for the underground, Bonhoeffer fell in love with and became engaged to Maria von Wedemeyer. Three months later he was arrested by the Gestapo.   “Your life would have been quite different, easier, clearer, simpler, had not our paths crossed,” he wrote to her. But Maria stayed faithful

to Bonhoeffer to the very end.[13] While in Tegel Prison, Bonhoeffer wrote: “Church is only church when it is there for others.” One of the guards, Sergeant Knobloch, tried to smuggle Bonhoeffer out disguised as a mechanic. But Bonhoeffer rejected the escape plan in order to protect his fiancée and family.[14] A British fellow prisoner said later that ‘Bonhoeffer was all humility and sweetness with a deep gratitude for the mere fact that he was alive.’[15]

After Bonhoeffer was hung at Flossenburg, the prison doctor reported: “In the almost fifty years that I worked as a doctor, I have hardly ever seen a man die so entirely submissive to the will of God.”[16]

I thank God for the courage of Bonhoeffer that he sacrificed his own life in order to make a way forward for others. Bonhoeffer was truly a man who embraced his destiny.

[7] Metaxas, P.193, P.290 Himmler told Moni Von Cramin: “As an Aryan I must have the courage to take responsibility for my sins alone.” He rejected as ‘jewish’ the idea of putting one’s sins on someone else’s shoulders.