Many of us are unaware that BC was once a Spanish Territory.  Our famous Captain Vancouver, after which our city is named, was sent to the West Coast by the British Government to receive this land from the Spanish.  I took one year of Spanish in Grade 10 after finishing Grade 12 French in Grade 9.  Languages have always fascinated me, perhaps because I spent two years in Montreal learning French during the time of Expo 67.

Our St. Simon’s NV community has been on many mission trips over the years, especially to Mexico and Rwanda.  Our first St. Simon’s NV mission trip was to the Hispanic Anglicans in Honduras, one of the poorest countries in the world.  It was a wonderful opportunity to refresh my Spanish, preaching, teaching and even singing on the radio in Spanish.  Our Latino Honduran friends were very kind to me as I sought to improve my Spanish diction.  I think that they appreciated my making the effort to speak in their heart language.

The largest ethnic minority in North America is the Hispanic-speaking people with over 52 million in the United States, 14 million in California, and almost 5 million in Greater Los Angeles.  Fifty percent of all those recently added to the USA population were Hispanic.  Many commentators  predicted that the very close American Presidential election  would be won on November 6th by whichever way the Hispanic voters lean. (Hindsight comment: It was.)

One of the most delightful movies that crosses the Hispanic/Anglo divide is Bella.  My wife and I recently borrowed Bella from the local library, after a good friend recommended we check it out.  We were not disappointed with our ‘date night’ movie.  This stunning ‘once in a lifetime’ movie left us both in tears.  It left me with the conviction that Bella has the potential to do something beautiful in the world. Bella lights a candle in people’s heart.

Bella struggled for visibility until winning the prestigious People’s Choice Award at the Toronto International Film Festival as well as a Heartland Film Festival award.  Then our North Shore-based LionsGate Films and Roadside Attractions became the distributors.  LionsGate Films is part of the reason why with so much film activity, the North Shore is often called Hollywood North.

As the top-rated movie on the New York Times Reader’s Poll, the Wall Street Journal called Bella ‘the fall’s biggest surprise’.  With more than $10 million in domestic box office, it became one of that year’s top-ten-grossing independent films, breaking the record for a Latino-themed film in total box office earnings. 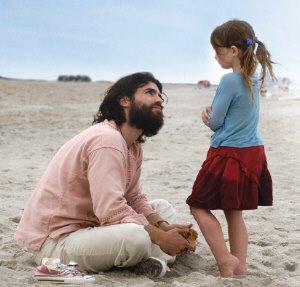 produce a movie that showed the real face of Latinos.  So often Hispanic people are portrayed in movies in less than flattering ways.  We need more culturally sensitive movies like Bella.  For Latino people, the kitchen is at the heart of the family.

Everything in Bella was food-related, whether speaking of the key actors who worked in restaurants or the intimate family times where Nina a pregnant non-hispanic waitress is welcomed into their Latino hospitality. Bella reminded me that the Hispanic people have a rich family heritage and deep spirituality that is an important contribution to our North American multicultural mix.  In an age where marriages and families are often collapsing, the Latino people have much to teach us about human dignity and making room for everyone.

The gist of the story is that Jose, a famous soccer star, becomes involved in a tragic car accident that ends his career.  He lost his passion for life and for soccer.  Meeting Nina changes everything for him and for her in a most unexpected way.  More than romance, Bella reveals the beauty of sacrificial love.  I thank God for Bella’s celebration of family, food, music and life-affirming Judeo-Christian values.  You could check this movie out of your local library or view it online.  My prayer for those reading this article is that we will daily rediscover the importance of family, kindness and compassion for others in need.

One thought on “Bella: Lightning a Candle”