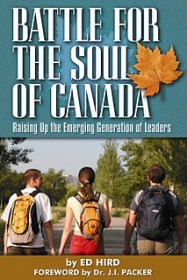 Before Samuel & Helene de Champlain came on the scene, the very word ‘Canada’ had become a joke in France, thanks to Jacques Cartier bringing back quartz and ‘fool’s gold’ from Canada.  The term ‘diamond of Canada’ became a symbol for deception and emptiness.  During Champlain’s lifetime, France largely ignored him.  To most French citizens, Canada seemed distant and unimportant.  Even well-educated Parisians denied the value of Canada, sometimes dismissing it as another Siberia.

In the 16th century, France’s population was six times that of England, it possessed as much coastline, it was more affluent, its sailors were more skilled and were the first to consistently visit the Canadian seaboard.  But in contrast to England, there was little vision in France for the priority of sending people to the New World.  To immigrate to Canada, there was even a financial disincentive of 36 livres charged to anyone leaving France.  As a result, Champlain and his Quebec people felt disregarded, deserted and discarded.  King Louis XIII even had the thoughtlessness to cancel Champlain’s modest pension of six hundred livres granted by Henry IV; forcing Champlain to successfully implore for its reinstatement. 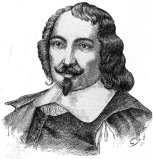 Champlain was born in 1567 in the town of Brouage, then a bustling seaport on the southwestern coast of France, some 70 miles (112 km) north of Bordeaux. His father was a sea captain and as a boy he became skilled at seamanship and navigation.  Champlain later commented: “…(Navigation) is the art…which led me to explore the coast of America, especially New France, where I have always desired to see the fleur-de-lys flourish.”  Ironically Champlain never learned to swim, even after crossing the rugged Atlantic Ocean twenty-nine times, as he thought swimming was too risky.

For a while Champlain served in the army of King Henry IV, fighting alongside Martin Frobisher in a joint undertaking by the British and French against the Spanish.  In 1599 Champlain captained a ship which returned Spanish prisoners-of-war, allowing him to explore the Spanish-controlled West Indies and Mexico.  As a result of his travels, Champlain prophetically suggested the idea of making a canal across Central America to shorten the trip to the southern Pacific Ocean.  King Henry IV was so impressed by Champlain’s map-making work that he granted him a lifetime income.  Henri IV also gave Champlain the title ‘de’, which marked him as a man of noble rank.

Four hundred and seven years ago, in 1603, Samuel de Champlain traveled up the St. Lawrence River to the site of present day Montreal, the First Nations village of Hochelaga.  In Champlain’s 1604 Journal, he wrote: “So many voyages and discoveries without result, and attended with so much hardship and expense, have caused us French in late years to attempt a permanent settlement in those lands which we call New France.”  After two Acadian colonizing attempts at St. Croix and Port Annapolis in the Maritimes, Champlain turned his eyes to the future Quebec City, a name that he translated from an aboriginal word: ‘where the river narrows.’  Quebec City, the Iroquois village of Stadacona, became the earliest enduring city north of Mexico City and Florida settled by Europeans.

Life was not easy for Champlain at Quebec 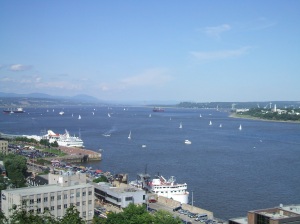 City.  While building a miniature Bastille-like ‘habitation’, Champlain had to stamp out an attempted murder plot against himself.  When spring finally broke up the ice in April 1609, only eight of Champlain’s 24 men who wintered at Quebec were still alive.

Champlain cared deeply about the First Nations people, building lasting friendships with many groups.  Pere Lalemant in 1640 wrote: ‘Would God that all the French, who were the first to come into these regions, had been like him!’ Champlain spoke prophetically to a gathering of the Montagnais, Algonkin, and French: “Our sons shall wed your daughters and henceforth we shall be one people”

When Samuel de Champlain married Hélène Boullé on December 30, 1610 in Paris, she was only 12 years old while he was approximately forty!  She was so young that her father insisted that she live at home for at least another two years.  At age 21, she moved to Quebec City.  The First Nations were intrigued by 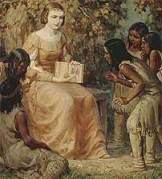 Helene who loved them dearly in return.  A titled lady with elegant outfits and etiquette, Helene was the center of attention at Quebec.  But for her the settlement held little joy.  Unlike Paris, Quebec had no shops, lively crowds or interesting chitchat.  As a high-spirited twenty-five-year-old, she pined for the exhilaration of Paris.  Champlain, fifty-six, favored the companionship of his hardy French and aboriginal voyageurs and the untainted grandeur of the Canadian outback.  And so, after four years, Champlain and Helene tragically parted ways.  Out of love, Champlain named the ‘Montreal Expo 67’ Island after her: Isle Saint Helene.  When Helene learned of her husband’s death in 1635, she entered a convent, choosing to become a nun rather than to marry again.

More than half of the fur-trading merchants working with Champlain were Huguenot (French Protestants) from La Rochelle; France.  The 1598 Edict of Nantes, which gave them religious freedom in Quebec and France, was first restricted in 1625 and finally revoked in 1685.  Although the Huguenot were therefore forbidden to worship in Canada by royal decree, the crews of Huguenot ships could not be restrained from holding services on board when in harbour.  The Huguenot loved to sing the psalms in French, a practice first encouraged and then outlawed by the French Royal Court.  Both Champlain and his wife Helene had been raised in Huguenot homes.  So thanks to Champlain, it was agreed that the Huguenot could hold prayer meetings on the ships, but sing psalms only at sea where no one else could hear.

After the English under British Commander 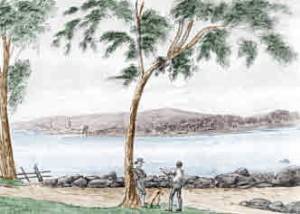 David Kirke blockaded the French relief supply ships, Champlain and his men nearly starved, surviving mostly on eels purchased from the Indians and on roots & wood-bark. Champlain was forced to surrender in 1628 to David Kirke’s brothers and was sent for four years to England.  The Treaty of Saint Germain-en-Laye was signed in 1632 which brought Champlain back to Quebec City, much of which had been burnt to the ground by the British.  After having devoted the last 32 years of his life to Canada, Champlain died of a stroke in 1635 at age 68.

Champlain was the most versatile of Canadian pioneers, at once sailor and soldier, writer and entrepreneur, artist and voyageur, visionary and pragmatist.  He wrote four important books relating Canada’s early history.  He produced the best North American maps and its earliest harbour charts.  Repeatedly Champlain put his life in jeopardy in order to discover routes to Canada’s western wilderness. He nurtured struggling Quebec to steadfast life.  “No other European colony in America, “commented the eminent historian Samuel Eliot Morison, “is so much the lengthened shadow of one

man as Canada is of the valiant, wise, and virtuous Samuel de Champlain.” I thank God for this courageous man Samuel Champlain who showed perseverance and dedication against impossible odds.  My prayer for those reading this article is that we too may show that same perseverance in facing our God-given daily tasks.