Have you or your parents ever treated education as more important than family? CS (Jack) Lewis and his father Albert were like ships passing in the night, not knowing how to connect.  Being very close to his calm, cheerful mother, her sudden death from cancer left ten-year old Lewis feeling like the mythical Atlantis was sinking.  Jack’s mother Flora Hamilton, who tutored him in Latin and French, was brilliant, earning an honors degree in mathematics at Queens University in Belfast.  Her father, grandfather and great-grandfather had all been Anglican (Church of Ireland) clergy, the latter being a bishop. As a child, Jack shared his mother’s strong faith.  It was like God had died with his mother’s tragic death.

Jack’s secure Irish childhood dissolved into a nightmare of six years of painful residential school living in England.  He later commented that English accents at the boarding school sounded to his childhood ears like some strange demonic chatter. Both Jack and his older brother Warren were traumatized by a brutal schoolmaster at their first boarding school Wynard in Watford. Jack called Wynard “Belsen” after the Nazi concentration camp.  A few months before Jack’s death in 1963, he stated that after fifty years of struggling, he had finally forgiven the headmaster Capron who had so damaged his earliest boyhood. In a letter to a young person, Lewis wrote “I was in three schools (all boarding schools) of which two were very horrid.  I never hated anything so much, not even the front-line trenches in World War I.  Indeed, the story is far too horrid to tell anyone of your age.”  Jack’s second residential school Malvern was rife with bullying and sexual abuse. After Jack threatened to shoot himself, his dad relocated him to Great Bookham, Surrey, to be taught by a private tutor William Kirkpatrick who had trained for the ordained ministry in Ireland. Kirkpatrick, as an ardent atheist, was portrayed in Lewis’ novel That Hideous Strength as MacPhee, a humourless, freethinking Ulsterman.

His father Albert was so swallowed in grief and self-pity that he pushed his two sons away physically and emotionally. Being afraid of his father as a child, CS Lewis described his dad as a man with “a bad temper, very sensible, nice when not in a bad temper.” His father’s emotional ups and downs taught Jack a distrust of emotions that would stay with him throughout his life.  He called his father’s family “true Welshmen, sentimental, passionate, rhetorical” people who moved quickly from laughter to wrath to tenderness, but with no gift for steady contentment.  His father, who dreamed of becoming an MP, instead served as a prosecuting solicitor in the Belfast police court.  Swallowed by his work, Jack’s father was sometimes cold, remote, distracted, and morose.  He had a tendency to cross-examine his sons as if they were on trial.  Jack learned to pretend, avoid and lie to his dad to keep him happy.  His father, said Jack, “could never empty, or silence, his own mind to make room for an alien thought.” His dad’s life was so orderly one could set a clock by his schedule.  When away from his job, he became fidgety and bored, eager to return to his legal responsibilities. Jack was so alienated from his father that he missed how much he was like his dad.  With swift imaginative minds and resounding voices, they both could persuasively make intricate arguments.  Jack and his dad shared a delightful sense of humour.  Albert’s sons claimed that their dad was the best storyteller in the world as he loved to act out the character parts.

His father was very strong on regular church attendance as the right thing to do, but never explained to his sons why.  Religion was very private. On Sunday Dec 6th 1914, Jack a confirmed atheist was confirmed in the Church of Ireland in order to avoid a fight with his dad, “one of the worse acts of his life”.  Jack later commented, “Cowardice drove me into hypocrisy and hypocrisy into blasphemy.” At age seventeen, C.S. Lewis explained bluntly to a Christian friend he’d known since childhood, “I believe in no religion.  There is absolutely no proof for any of them, and from a philosophical standpoint, Christianity is not even the best.” One of his prep school friends described Jack as a “riotously amusing atheist.” As a teenager, he resented God for not existing, and for creating such a flawed world.  Just after World War I, Lewis, a wounded veteran, boasted that during his time in the trenches, he “never sank so low as to pray.” To a friend about the same time, he said “You take too many things for granted.  You can’t start with God. I don’t accept God!”

After ending up in hospital on April 15th 1918 from WWI shrapnel injuries, Lewis wrote his father Albert, saying “I know that you will come and see me…(I was) “never before so eager to cling to every bit of our old home life and see you…Please God, I shall do better in the future.  Come and see me.” His dad however stayed in Ireland, refusing to change his busy work schedule.  In October 1918, after successive requests for his father to visit him in hospital, CS Lewis wrote his dad saying “It is four months now since I returned from France, and my friends laughingly say that ‘my father in Ireland’ is a mythical creation.” The father wound and resulting emotional cutoff became ever deeper.

While teaching at Oxford, Jack kept running into Christians, like JRR Tolkien, who persuaded him that Christianity is a true myth, a real story grounded in history.  Jack’s atheist background helped him reach out to spiritual seekers through books and BBC radio. His voice became the most widely recognized in Britain after that of Winston Churchill. His books, which still sell six million copies a year, led him to become one of the most influential voices in contemporary Christianity.  The late Chuck Colson, converted by Lewis’ book Mere Christianity, contended that Lewis is ‘a true prophet for our post-modern age.’ As one of the few Christians read extensively by non-christians, he became known as the Apostle to the skeptics.

Was it a mere coincidence that CS Lewis turned to God in the very summer of his father’s death?  In August 1929, Lewis went to Belfast to visit his seriously ill father, bringing significant family reconciliation.  Lewis said that his dad was taking his cancer surgery ‘like a hero.’ After his dad’s death, Lewis commented, “As times goes on, the thing that emerges is that, whatever else he was, he was a terrific personality…how he filled a room.  How hard it was to realize that physically he was not a big man.” Lewis deeply regretted how insensitively he had treated his dad.  How might CS Lewis’ restoration to his father’s love inspire us to deeper family reconciliation in 2020? 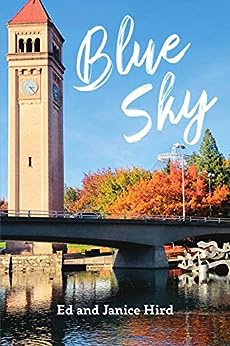 If you’re a fan of Karen Kingsbury, then you’ll love Blue Sky. Get your copy today. Click for either paperback or kindle.